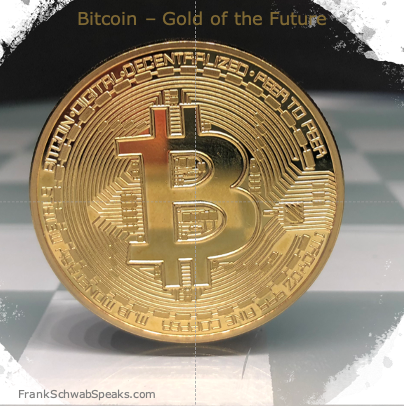 According to Google Trends, the internet community lost more than 80% interest after December 2017. But in the past few months, internet media interest in Bitcoin has increased significantly.

In Gartner Hype Cycle terminology: After a “Peak of Inflated expectations” in December 2017, Bitcoin plummeted into the “Trough of Disillusionment” in the following two years and is currently on the “Slope of Enlightenment”. 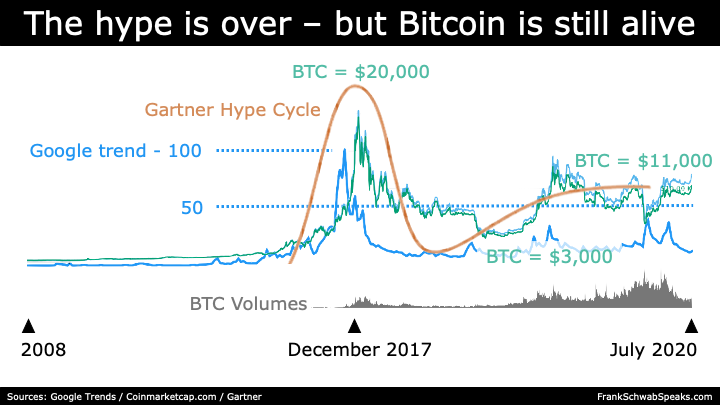 In his white paper “Bitcoin: A Peer-to-Peer Electronic Cash System” from 2009, Satoshi Nakamoto (pseudonym) introduced Bitcoin as an Internet payment system. But it doesn’t look like that at the moment, despite increasing Bitcoin wallets.

There are now more than 50 million bitcoin wallets and around 10 million new ones are added every year. But usage is not growing accordingly. For four years, the daily confirmed Bitcoin transactions have fluctuated between 200 and 400 thousand a day. 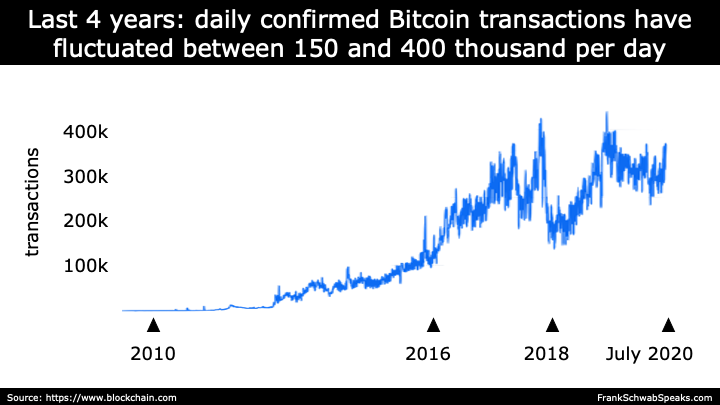 Bitcoin is therefore far from being a payment system, but much more a digital asset. Projects like PayPal, Facebook’s Libra or Ripple seem to be more promising in the fight for global payments.

“Bitcoin is a first of its kind – a digital asset & for me the gold of the future.”

Therefore, a comparison between Bitcoin and gold is worthwhile to take a look into the future.

Gold is rare, as is Bitcoin

Gold is rare, beautiful to look at and you can make jewelry out of it. That’s why people have thought it valuable for millennia. But when the going gets tough, people are not fed up with gold. And because of its physical denomination and weight, gold is neither easy nor quick to transport or trade. Try to pay for a bicycle as the owner of 1 kilogram gold bar. You would have to melt the gold bar, take the appropriate amount, etc. In the age of digitalization, gold appears as a relic of the past.

Although you cannot eat bitcoins, but bitcoins are just as rare as gold. Currently more than 18.4 million bitcoins have been generated, but in the long run the bitcoin volume is limited to 21 million. This is similar to gold. Around 198.5 million kilograms of gold have been mined worldwide. According to experts, a maximum of additional 48 million kilograms of gold can be produced.

“Gold is a relic from the past.”

Bitcoin is easy to use and you can pay with it

Unlike gold, bitcoins are much easier to piece and transfer. The smallest Bitcoin denomination is 1 Satoshi. This corresponds to 0.00000001 Bitcoin. Bitcoin and Satoshi can be transferred in seconds between anywhere in the world. Even bicycles can now be paid online and offline with Bitcoin at some retailers. And even if a merchant does not accept Bitcoin, there are now Bitcoin-based credit cards that allow you to pay in virtually every major FIAT currency (USD, EUR, Pounds, …). The Bitcoin-FIAT exchange is done by the providers of these credit cards completely automatically in the background.

Often the Bitcoin is heavily criticized because of its price volatility. And the facts confirm this criticism. In the past five years, the price initially increased a hundredfold and has fallen again by three quarters since its high of almost USD 20,000 in December 2017. However, if one observes the last 12 months, a decline in the wide fluctuation range can be seen. For a long time, the price of a Bitcoin fluctuated between USD 5,000 and USD 12,500. – This is comparable to other asset classes, such as stocks. 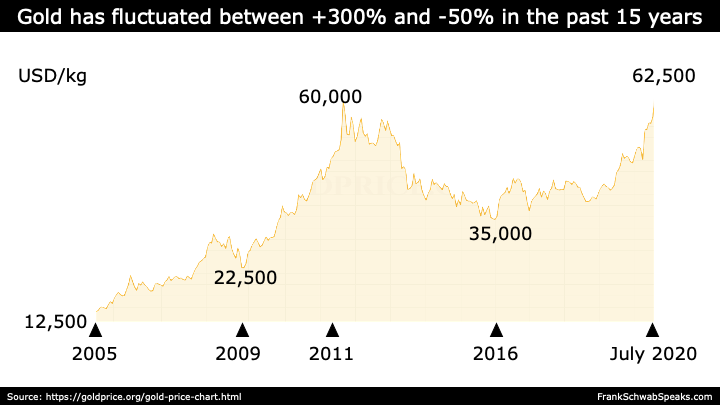 The fluctuations in gold and bitcoin are therefore quite similar, albeit in different time periods.

Despite high volatility, Bitcoin appears to be a useful and practical alternative to store value in countries with very high inflation rates, such as Venezuela, Ukraine or South Sudan, alongside FIAT currencies.

According to the World Gold Council, up to 3,000 tons of gold are mined annually worldwide. At an average cost of USD 31,571 per kilo of gold produced, the total cost of the year is USD 94.7 billion.

This means that the cost of producing gold in 2017 was 20 times more expensive than that for bitcoin.

Also, annual storage costs are to be regarded with Gold or Bitcoin as investment forms. For gold, this can amount to up to 1% of gold wealth annually. For example, if you store your gold at a specialized and professional custodian in Switzerland or Singapore, and not in the in-house vault. The safekeeping of Bitcoins is usually still free of charge, whether in your own wallet or at a crypto exchange. 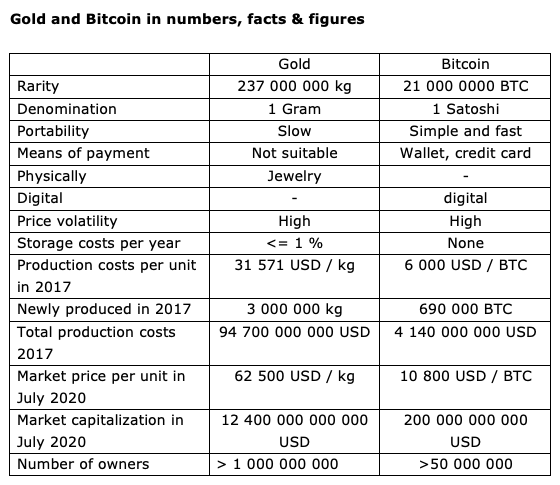 In the event that humanity accepts bitcoin as a digital asset in the future, as does gold today, then it is interesting to find a fair value for bitcoin. From my point of view, the market capitalization of gold is a starting point for the future fair value of Bitcoin.

The current market value of the 198.5 million kilograms of gold is USD 12,400 billion. If this market value is spread over the current more than 18.4 million bitcoins, then this results in a price of USD 672,000 per Bitcoin. 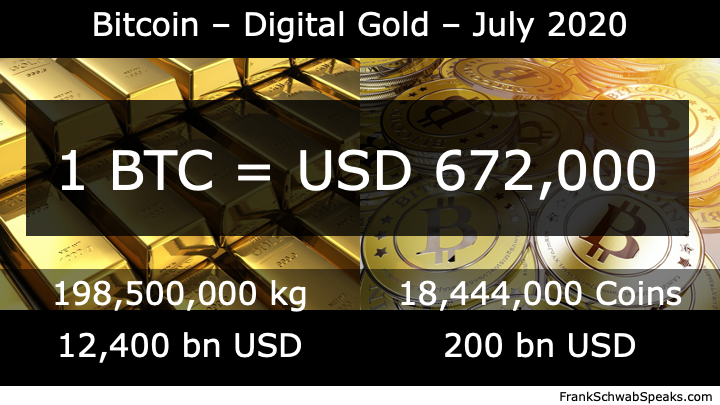 It’s hard to predict how long it takes for a similar number of people to own Bitcoin, as does Gold today. Currently, about 50 million people own Bitcoin, while one can assume that more than 1 billion people own gold in the form of jewelry, coins or securities. But you can make estimates. The conditions for a comparatively fast spread are good, because actually it only needs a smartphone and a Bitcoin wallet.

On the one hand, there are already more than 2 billion smartphones worldwide, with a strong growth. 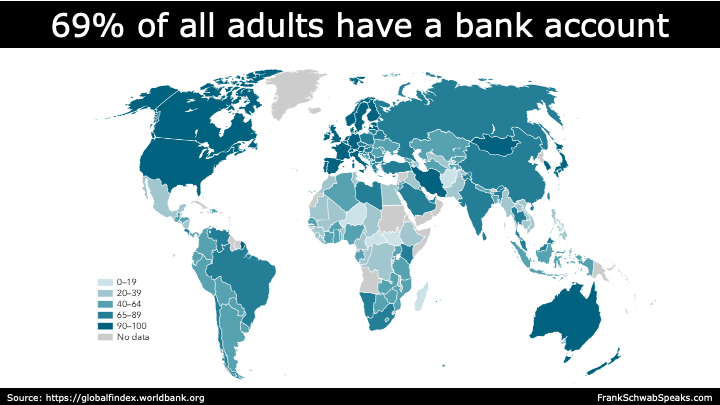 On the other hand, more than 1.2 billion bank accounts were opened between 2011 and 2017, according to the World Bank’s Global Findex database. Worldwide, it is estimated that two-thirds of all adults have a bank account. Thus the second condition for the basic understanding of the humans for the banking and a Bitcoin Wallet is created.

“Together, these two developments will make it possible for Bitcoin to be widely distributed worldwide over the next 5 to 15 years.”

Should the Bitcoin actually develop into digital gold, then further, enormous increases in value are to be expected. It’s not about Bitcoin replacing gold. But Bitcoin creates a new, additional asset class. And I therefore expect Bitcoin to establish itself as a digital asset in the wallets and portfolios of hundreds of millions of people in the not-too-distant future. 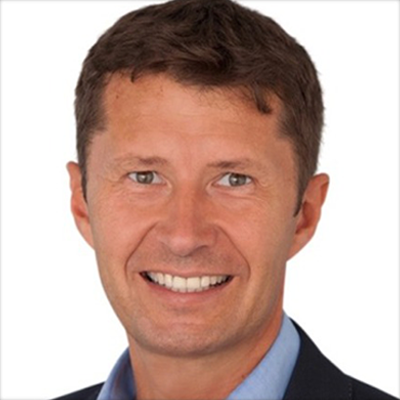 Frank J Schwab
Frank Schwab is a strategic advisor and co-founder of FinTech Forum Frankfurt, member of the Board of Directors at Gulf International Bank in Bahrain, and member of the Risk Advisory Committee at PayU in Amsterdam.

Before that, Frank Schwab worked as, Managing Director of GIZS (paydirekt / Sparkassen), CEO of Fidor TecS AG, Chairman of Hufsy in Copenhagen, Senior Advisor at McKinsey, Member of the Technology Advisory Board of Sberbank, Moscow, and a director of innovation for Deutsche Bank.

He has also lectured several years at the Mannheim Business School Creativity and Innovation Management.

Frank Schwab is a strategic advisor and co-founder of FinTech Forum Frankfurt, member of the Board of Directors at Gulf International Bank in Bahrain, and member of the Risk Advisory Committee at PayU in Amsterdam. His main topics are new ideas, creativity, innovation, technology and banking. Before that, Frank Schwab worked as, Managing Director of GIZS (paydirekt / Sparkassen), CEO of Fidor TecS AG, Chairman of Hufsy in Copenhagen, Senior Advisor at McKinsey, Member of the Technology Advisory Board of Sberbank, Moscow, and a director of innovation for Deutsche Bank. He has also lectured several years at the Mannheim Business School Creativity and Innovation Management.

Universal Financial Inclusion in the Era of Fintech and COVID19

PAYMENTS IN 2025 THE FUTURE IN THE FINANCIAL SERVICES

Artificial Intelligence the Next key in the Banking Transformation

THE IMPORTANCE OF THE FINANCIAL INCLUSION